Every animal species has an Endocannabinoid system (ECS) which is a biological system comprised of endocannabinoids, receptors and enzymes. This system is believed to help regulate a variety of functions including sleep, mood, memory and pain.

Vertebrates such as mammals, fish, birds, and reptiles, and invertebrates such as sea urchins, leeches, mussels, and nematodes, all have an Endocannabinoid system. Every being in the animal kingdom shares this complex physiological mechanisms.1

What Does CBD Do For Dogs and All Of Our Pet Friends?

According to veterinary researchers, pets can benefit greatly from cannabis and CBD2. With the supplementation of these cannabinoids, the key symptoms of many diseases can be effectively managed. Pain, inflammation and anxiety are among the more researched symptoms. The supplementation of cannabis and CBD make a huge difference in alleviating these symptoms and enriching the life of your pet. Key palliative effects that cannabinoids can exert are the relief of pain, anxiety and inflammation and can prove to be very useful in treating canine diseases. 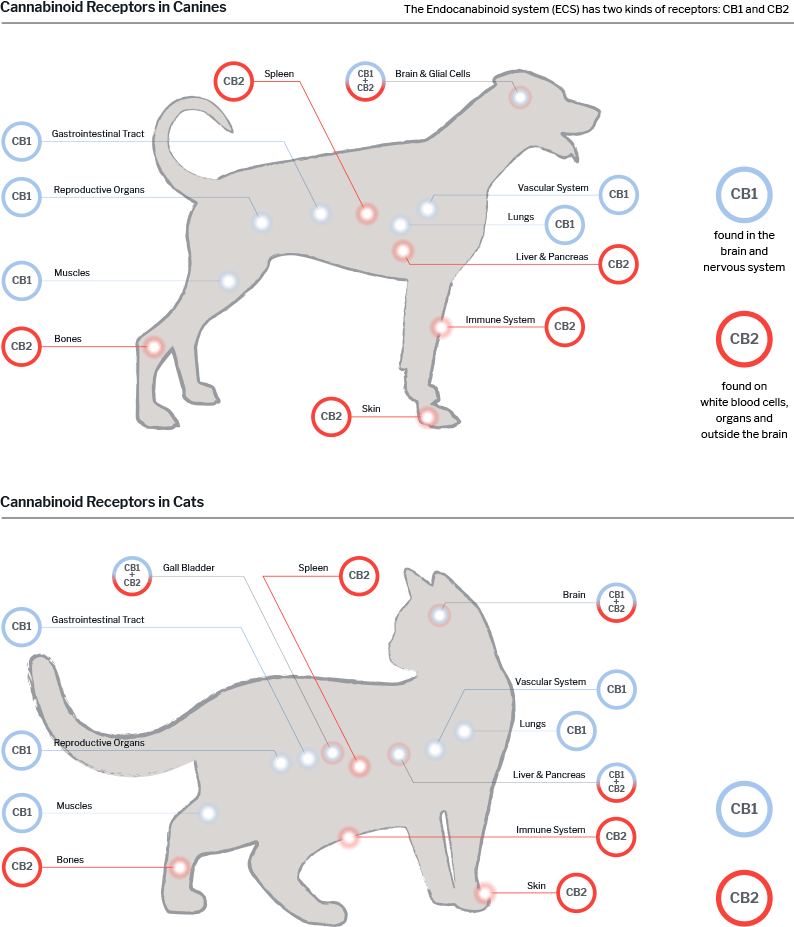 How much CBD For Dogs? How do we determine an effective dose?

Cannabis dosing becomes highly individualized when considering an effective therapeutic dosage. It is always prudent to start at low dosages and then increase them carefully and accordingly. There are two reasons for this procedure; minimizing potential cannabis side effects of temporary cognitive impairment, and finding the optimal therapeutic window.

Cannabis dosing is specific to the type of symptoms or ailments that need to be addressed. Dog owners that are concerned or unsure about using cannabis, should research accurate and individualized information. Consulting with a qualified and knowledgeable cannabis pharmacology expert or a veterinarian versed in the ECS, will minimize the trial and error involved.

Anxiety in dogs is often manifested as separation anxiety, fear of storms and loud noises. This anxiety usually leads to an uncontrollable dog or one demonstrating aggression. Short term stress is quite normal. When this stress becomes regular behavior it negatively affects both the dog and the owner. Anxiety also has the potential to manifest its symptoms in a condition that is physical and can contribute to a shorter life span for dogs.3

Stress from constant anxiety is often associated with cardiovascular, auto-immune and behavioral compulsion disorders. Behavior modification and medication is often suggested by dog trainers and veterinarians. CBD has the potential to make a big difference because of its strong anti-anxiety effects. The research suggests that CBD exerts therapeutic function by activating serotonin receptors (5HT1A), and by blocking the enzyme responsible for oxidation of cannabinoids (FAAH), thus enhancing the naturally produced endocannabinoids.

Very recent studies suggest that CBD is able to stimulate this process and neurons are formed subsequently. This is a process called neurogenesis. CBD is able to synergistically produce anxiety relief. Many dog owners have shared their successful experiences with CBD 4 in written testimony.

A dog owner should be aware if a canine is suffering pain. In many instances, the pain goes unnoticed. Because our dogs cannot tell us when they are in pain, it is important for us to become aware of any changes in the mood or physical behavior of our pet. It is important to be aware of unusual behavior like agitation, sensitivity to touch, grumpiness and snappishness, depression, poor eating habits or a reluctance to walk or engage in the usual activities that made your pet active.

Cannabinoids are effective pain modulating compounds. Each compound has its own variety of pain-relieving action. It is important to understand this concept because cannabinoids do not act as pain medications. The physiological effects that these compounds are able to exert is complex. Each type of cannabinoid, whether THC or CBD, has its own mechanism of exerting pain relief. Cannabinoids have a wide therapeutic capacity besides the relief of pain. These additional therapeutic benefits are mediated mostly through the ECS, along with the other parts of our physiology.

Intervertebral Disc Degeneration (IVDD) and Canine Osteoarthritis are among the most common and severe canine chronic pain conditions that dogs experience.

IVDD or Intervertebral Disc Degeneration is common among older dogs. It is difficult to treat because when damage to the discs occur there is a long and painful recovery and even surgery may result. CBD has the potential to modulate pain in the dorsal root ganglia. Researchers have discovered that clusters of nerve cells located inside the spine have a substantial amount of cannabinoid receptors.6 As was mentioned earlier, there is promise that cannabinoids may do more than modulate pain. It is known that cannabinoids relieve inflammation and activate the adaptogenic or healing response.

Canine Osteoarthritis, of which severe pain is a symptom, can be effectively managed with cannabinoids. As our dogs become older their physiological make-up begins to need more support to counter all of the physical constraints that appear with advanced age. Osteoarthritis, which is the wearing away of cartilage and protective tissue on the extremities of bones, is a source of chronic pain. Because this is an irreversible condition, managing the chronic pain becomes the most viable strategy. Many vets recommend and prescribe the use of Non Steroidal Anti Inflammatory drugs or NSAIDs. These drugs usually are accompanied by side effects such as vomiting, diarrhea, decrease in appetite and decrease in activity level. Cannabis offers a natural solution to suppress pain in this condition. According to recent studies, dosage of isolated CBD ranging from 2mg/kg to 8mg/kg was able to produce a significant decrease in pain with little side effects, and an increase in activity of dogs with osteoarthritis.7 To be more specific, small dogs with an average weight of 20 lbs. would require a dose between 40mg and 160mg. Medium to large dogs with average weight of 55 lbs. would require a dose between 110mg to 440mg.

Inflammation is a symptom in many underlying conditions.Veterinarians will often prescribe Non Steroidal Anti Inflammatory Drugs to manage this condition.These drugs are able to decrease inflammation by decreasing COX-2. CBD does this as well. COX-2 is an enzyme that plays a major role in inflammatory disease and chronic pain. When it is produced, it speeds up the production of key chemical messengers that promote inflammation. CBD inhibits the production of the COX-2 enzyme in the body.

Because cannabinoids have such a profound and wide range of therapeutic influence on the whole body, the therapeutic benefit can be equally as profound. Supplementing our natural cannabinoids with plant based cannabinoids to target metabolic diseases, and also cancer, is a new and promising development in cannabis research that is proving to be very effective.

Cannabinoids are able to influence receptor sites that modulate metabolic disorders such as diabetes and obesity. By activating these sites, the ECS may be targeted to restore metabolic homeostasis.8, 9

Cannabinoids also influence anticancer pathways besides creating strong palliative effects. The activation of these targets leads to cancer cell apoptosis or what is more commonly referred to as programmed cell suicide. Therefore, the pro-apoptotic effects of cannabinoids may prove to be a safe alternative to, or used in conjunction with, standard cancer treatments There are few synthetic and natural compounds that are able to exert this type of therapeutic effect in cancer patients. Most cytotoxic compounds have serious side effects. Using cannabinoids as cytotoxic agents is a promising and safe solution when used with standard cancer treatments.

A study published in 2011 by the College of Veterinary Medicine, University of Georgia, Department of Small Animal Medicine and Surgery, suggests that cancer accounts for a large percentage of death in older dogs.10

Although the science is still unclear about the exact mechanisms and type of cancers cannabinoids are able to effectively counter, there is promising early evidence that indicates the efficacy of cannabinoids in dealing with cancers in dogs.11, 12

Safety And Side Effects

Cannabinoids have been identified as some of the most powerful neuroprotective and therapeutic compounds in nature. There have been studies conducted on the toxicity of cannabinoids in dogs, but there is very little reliable evidence suggesting that CBD has toxicity at extremely high levels. Researchers have tested single doses 3,000mg/kg of THC which has proven to be non lethal.13 In addition, a single study recently conducted on (6) six mice indicated that CBD produces liver toxicity. However, the methods used to source the CBD were questionable and the results were inconsistent.

In short we need more studies on the long term effects of CBD use. The published literature and anecdotal data we currently have show that consistent and therapeutic doses of CBD are a safe alternative and offer fewer side effects than most over the counter or prescription medications.