Cannabidiol (CBD) is only one among hundreds of productive cannabinoids that exist within the cannabis plant. Through past and present research, the scientific community is constantly discovering concrete data to back up what has recently felt like a trend.

Both human and animal studies have shown that CBD can reduce anxiety, provide pain relief, decrease inflammation, prevent seizures, as well as provide anti-nausea relief from those suffering from cancer, but little is known about how CBD oil works in the body and in the brain, what receptors CBD binds to, how CBD is digested in our bodies, and how long CBD stays in the body.

What Receptors Does CBD bind to?

All cannabinoids produce effects in the body by interacting with cannabinoid receptors, which form part of the endocannabinoid system. In lab models, CBD binds to 65 different receptor sites, with the most well-known receptor sites being CB1 and CB2, serotonin receptors and adenosine receptors. 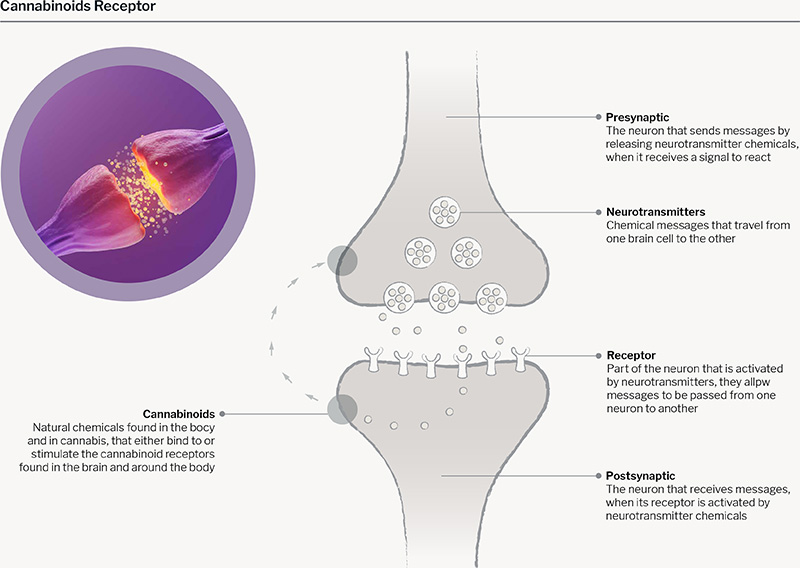 There are four types of binding sites: receptors, ion channels, enzymes, and transporters.

CBD does not directly activate the CB1 and CB2 receptors, contrary to popular belief. CBD binds directly to these receptors through a different route, by negatively influencing, or modulating these receptors. This means that CBD is able to bind to these receptors in such a way that it changes the response to stimulus, or changes the way that the receptor activates. When CB1 and CB2 are activated by the regular interacting compounds such as THC and anandamide, this interaction causes the normal effect of full activation to be regulated.

The activation of serotonin receptors by CBD produces several therapeutic effects.2 There are a wide variety of benefits resulting from this relationship including possible anxiolytic (anti-anxiety) mechanisms, reduction of Ischemia (brain injury from stroke due to inadequate blood supply), and anti-nausea mechanisms. [2,3,4,5]

Activation of this receptor results in improved cognition, decreased aggression, increased sociability, decreased impulsivity, elimination of drug seeking behavior, and also increased sex drive and arousal. This interaction is an important contribution to the anti-anxiety effect that CBD produces. The anti-anxiety effect has been observed in the studies of mice in which mice are microinjected with CBD and undergo panic tests.10 With the use of CBD, anxiety from panic is reduced.

Lastly, the interaction between CBDA (the acid form of CBD) and 5- HT1A is shown to significantly reduce nausea. This therapeutic effect has been identified in animal studies in which the animals are given a strong chemotherapy drug called Cisplatin known to cause overwhelming side effects. The effect from CBDA is strong enough to reduce the nausea produced from Cisplatin. [6, 7] The activation of 5- HT1A by CBDA can prove to be an important tool to reduce the side effects in humans undergoing standard cancer treatments of which nausea is a side effect.

What else does CBD bind to?

Adenosine receptors are responsible for the caffeine effect and while their interaction with CBD is less acknowledged, it is still important to note. These receptors regulate inflammation and heart function, as well as the release of dopamine to make people feel good and glutamate which stimulates the brain to make people excited. It has been observed in animal studies that adenosine receptor activation by CBD produces anti-inflammatory and neuro-protective outcomes that are effective in the treatment of Multiple Sclerosis.8

It has also been discovered that CBD activation of adenosine stops an abnormal change in heartbeat which is induced by inadequate blood flow to the heart muscle.9 Stimulating these receptors can also explain some of the sedative effects of CBD.

Glycine receptor activation by CBD has been identified in animal studies, which shows that the therapeutic effect produced is able to mediate neuropathic pain and inflammation in the spinal cord and brainstem.10

GPR55 is a cell membrane receptor that when activated by cannabinoids produces anti-inflammatory effects and decreased migration of neutrophil immune cells, the most common type of white blood cell. These are receptors in which their physiological roles have not yet been fully identified. They are abundantly present in immune cells that are known as NK cells or Natural Killer cells; cells best known for killing virally infected cells. These cells also detect and control early signs of cancer. CBD activation of GPR55 receptors increases production of proteins such as TNF-α which are produced by NK cells. They are important to the resistance of infections and cancers.11

Ion channel receptors are a grouping of vital cell membrane proteins that open and close in response to chemical signals. These openings are able to control the ions that enter or exit the cell. Both the type of proteins/amino acids that line this channel and the physical width of the channel determine which types of ions are able to enter into or out of the cell.

The TRPV1 ion channel, known as the “capsaicin receptor”, is also activated by CBD. This activation has several therapeutic outcomes which include pain-relief, anti-inflammation, and also contributes to the antipsychotic effects that CBD produces.12

CBD activates another Ion channel receptor known as VDAC1. Activation of these types of receptors results in a wide variety of cell functions such as cellular energy rationing, calcium homeostasis, and apoptosis (programmed cell death), all of which are highly complex. 13 CBD activation of this receptor produces neuro-protective effects.

How is CBD metabolized?

While water soluble compounds in foods are absorbed through the stomach lining and almost immediately enter the bloodstream, CBD is absorbed and broken down in our bodies through our lipid metabolism.

CBD, THC, and all cannabinoids are lipid molecules that behave like fatty acids in our bodies. These compounds are not water soluble. Lipid molecules must travel further down the digestive tract and travel through different routes in order to be broken down and appropriately absorbed. The liver and pancreas releases bile and enzymes to break down fat molecules in the small intestine. These molecules go through a series of transporting routes in our system where they are constantly broken down and repackaged in order to be absorbed through our cell membranes, to be stored in adipose tissue cells or transported to our liver. After these are made water soluble in the small intestine their journey continues with absorption through lymphatic capillaries that empty in to blood vessels, enter into the liver and eventually broken down further through the cytochrome CYP450 enzyme pathways.

Eventually when the lipid molecules reach cells, they bind to a fatty acid binding protein, carrier proteins in charge of transporting fatty acids into cells. When fatty acids enter cells they are oxidized by FAAH, Fatty Acid Amide Hydrolyze, the enzyme that breaks down these compounds. It takes a long time from when CBD is ingested for it to finally be metabolized to become available in the bloodstream to exert the therapeutic effect and eventually broken down in the body.

How long does it take to feel the effect?

The average onset of action from time of ingestion is one and a half to two hours, but individual metabolism will play a role. The absorption rate and time for bioavailability of CBD depends on individual digestion rates and metabolism.

As mentioned previously in order for CBD to be absorbed through the gut, there are a number of steps that these molecules go through to be absorbed. Once this process is complete, the molecules are then able to pass through lymphatic vessels that empty into blood vessels and eventually reach our liver. Individuals who have active metabolisms are able to absorb and experience therapeutic benefit faster than individuals with a less active metabolism.

How long does CBD last?

When CBD is ingested after it is metabolized and becomes bioavailable, it has a half life of between six to eight hours. This is the period of time that CBD is active in the body before it is broken down. Many patients that use CBD for sleep don’t calculate this factor, which explains groggy mornings if CBD is taken too late in the evening. It is recommended to ingest CBD two hours before bedtime so the maximum benefits are felt and the CBD is fully broken down by morning. Half life will vary based on the method of absorption, which includes ingesting and smoking.

Inhaling CBD will have a different half life than ingesting it. The half life for inhaled CBD is about four hours.

When it comes to testing for cannabinoid levels in the body, some CBD products may test positive for THC content in the blood as the legal limit is .3% THC in CBD products. Higher quality, whole plant products have a higher potential for THC to show up on a test versus products made with distillate or isolate, which likely have no THC.

While there is still research to be done, the studies that have been published are demonstrating the exciting potential that CBD and cannabis can offer the medical field. By understanding what receptors interact with CBD, how CBD works inside the human body, and how long CBD lasts in our systems, we can begin to finally grasp the full potential of this powerful plant.

[11]
Chiurchiù, Valerio, et al. “The differential characterization of GPR55 receptor in human peripheral blood reveals a distinctive expression in monocytes and NK cells and a proinflammatory role in these innate cells.” International immunology 27.3 (2014): 153-160. 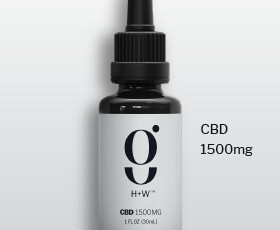 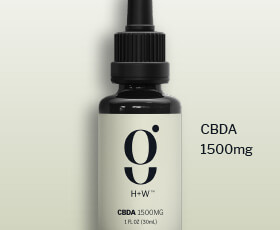 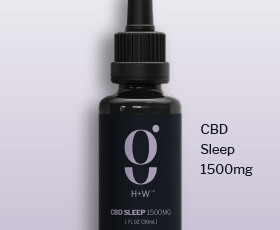 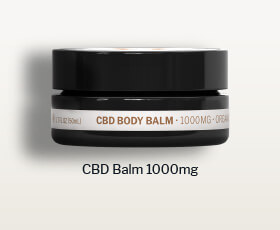